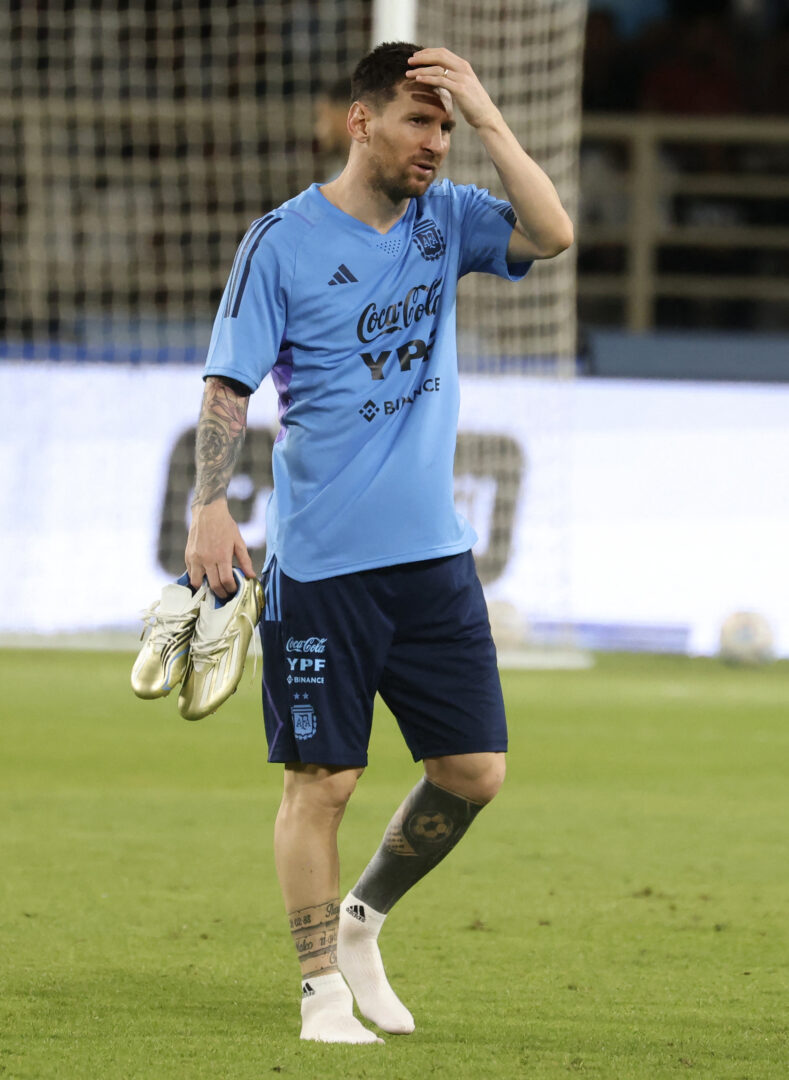 KARIM SAHIB/AGENCE FRANCE-PRESSE LIONEL Messi kicks off what could be his last World Cup stint when Argentina battles Saudi Arabia in Group C.

DOHA, Qatar (AFP) — Lionel Messi will embark on Tuesday on what will surely be his last chance to win the World Cup, with Argentina and holders France both in action in Qatar.

After England thumped Iran 6-2 to showcase their title credentials, day three of one of the most controversial World Cups in history will have four matches.

Messi and his strongly fancied Argentina side are up first when they face Saudi Arabia in Group C, followed by Denmark versus Tunisia in Group D.

The evening matches are Robert Lewandowski’s Poland against Mexico in Group C and the last game of the day tees up reigning champions France, spearheaded by Kylian Mbappe, versus Australia in Group D.

Much of the attention though will be on forward Messi.

The 35-year-old has won pretty much it all and is one of the greatest footballers of all time, but World Cup glory has eluded him and this is surely his last time to rectify that glaring omission.

“It is probably my last World Cup, my last chance to land this great dream that we all have,” Messi told reporters in Doha on Monday.

“I don’t know if this is my happiest moment, but I feel great.”

“I’m older, more mature, I want to make the most of everything, to live it with the maximum intensity and to enjoy every moment that I have.”

In recent days, Messi has twice trained apart from the rest of the squad but he moved to dispel any concerns among Argentines that he might not be fit for Saudi Arabia.

“I trained apart because I had a knock, it was precautionary, but nothing unusual,” he said.

Argentina head into the tournament as Copa America holders and unbeaten in 36 matches dating back to 2019.

If Messi is approaching the end of one of football’s greatest careers, his Paris Saint-Germain teammate Mbappe is only still starting his.

And the 23-year-old could be in for a field day against an Australia side who are lacking the stars of yesteryear and needed an extra qualifier to reach Qatar.

Like when Argentina face Saudi Arabia, anything other than a victory for holders France would be a huge shock.

Didier Deschamps is missing Paul Pogba and Ballon d’Or winner Karim Benzema, both out of the tournament through injury, and the French coach said that puts even more onus on Mbappe.

“He has always had the ability to make the difference and we will need that,” Deschamps said.

“He has the ability to be decisive at any moment, unlike many other players.”

Mbappe, who turns 24 next month, will lead a French attack in which Olivier Giroud is now expected to start in the absence of Benzema.

Lewandowski is the third of the three world-class attackers on display on Tuesday, but for his all goalscoring exploits down the years, the 34-year-old is yet to score at a World Cup.

The Barcelona predator has struck 25 times across the last two World Cup qualifying campaigns but has yet to open his account at the finals.

Goalkeeper Wojciech Szczesny believes Lewandowski will break his duck in Qatar as Poland aim to reach the knockout phase for the first time since 1986.