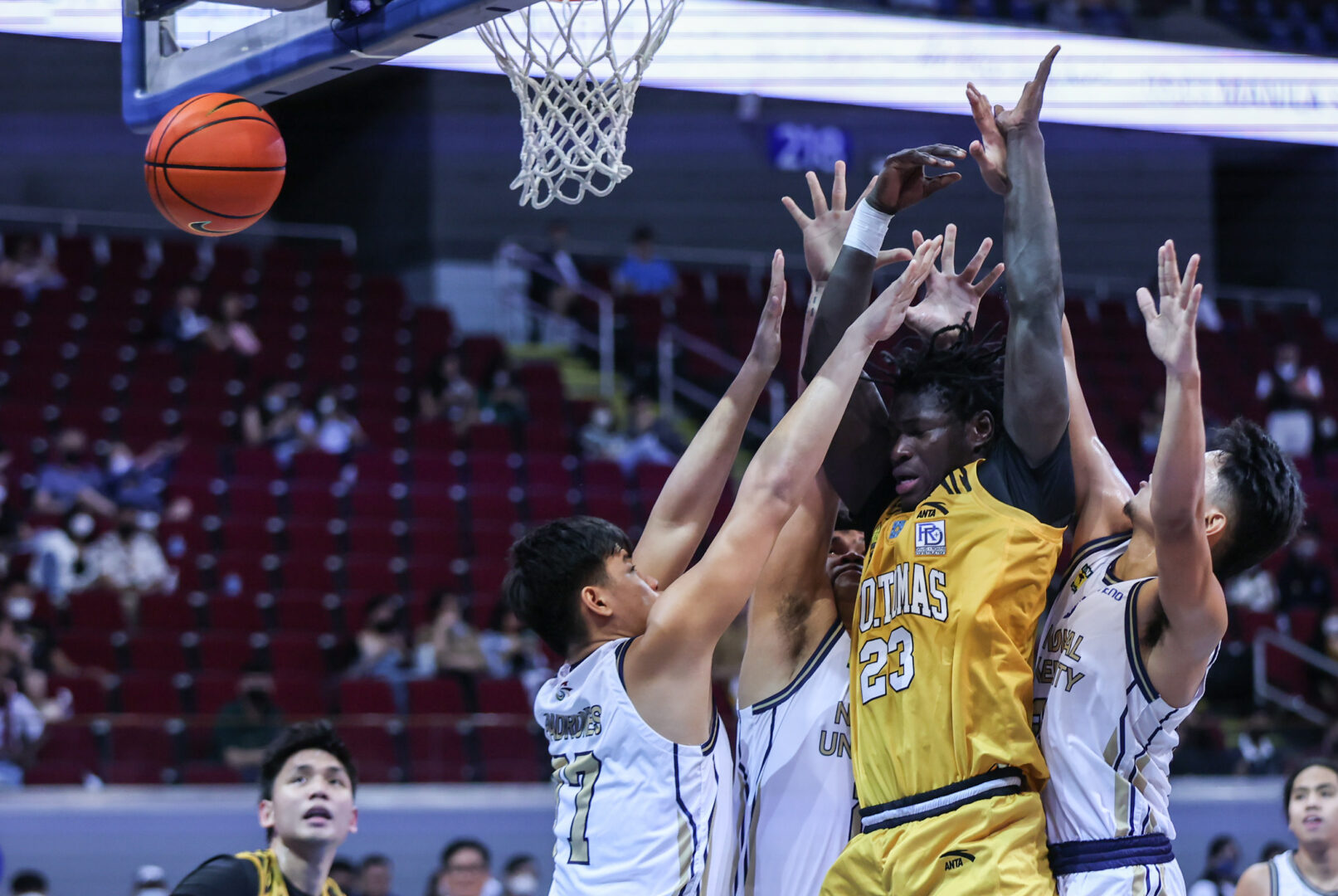 UST’s Adama Faye loses the ball from NU’s defense during the UAAP Season 85 round 2 match at the Mall of Asia Arena in Pasay, November 20, 2022. Photo by Rio Deluvio

National University ended a seven-year drought for a Final Four appearance after eliminating the woeful University of Santo Tomas in a come-from-behind, 67-57, win in the University Athletic Association of the Philippines Season 85 men’s basketball tournament at the Mall of Asia Arena on Sunday.

The Bulldogs, who went down by as many as 11 in the first half, used a 12-0 rally midway in the fourth quarter to secure their fourth straight victory to keep a tight hold of the second spot with a 9-3 win-loss record.

NU thus joined defending champion University of the Philippines in the semifinals and is now in a good position to clinch a twice-to-beat advantage.

“Bad win for us but still naka-survive kami sa lintek na UST na ‘to. UST is playing with no pressure. They played their hearts out. They gave us a headache but good thing in the second half we were able to come back. We regrouped to get the win,” Bulldogs coach Jeff Napa said.

Omar John added 12 markers while Kean Baclaan scattered 10 points, six assists, five rebounds and a steal for the Bulldogs, who started out flat and went behind, 25-36, with 6:30 left in the second period.

Down 52-54, NU strung 12 straight points with Clemente hitting the dagger three-pointer to give the Bulldogs a commanding 64-54 lead with 1:51 left in the ballgame.

UST absorbed its 10th straight defeat in 11 games despite the 20-point, six-rebound effort of Nic Cabañero.

Adama Faye posted a double-double of 11 markers and 15 boards in a losing cause for the Tigers.

Meanwhile, Ateneo de Manila University crawled out of a 19-point hole using another strong second half performance to stun Far Eastern University, 71-65, and secure at least a playoff for a Final Four seat.

The Blue Eagles uncorked a huge 20-1 run bridging from the third quarter until the early part of fourth period to retake the lead before outplaying the Tamaraws the rest of the way for their eighth win in 11 starts.

“It always feels like an escape act whenever we win against them,” Ateneo mentor Tab Baldwin said following another narrow escape over FEU.

“That win was just heart and some decent execution in the fourth quarter,” he added. “Up until then, we were pretty bad really in most aspects of the game.”

Ange Kouame had a double-double of 20 points on 7-of-10 shooting clip and 14 rebounds to pace the Blue Eagles. Forthsky Padrigao and BJ Andrade got 13 and nine markers, respectively, for Ateneo.

The Tamaraws came out smoking as they pulled away 39-20 with 2:39 left in the second period off a trey by Xyrus Torres.

FEU even held a 54-36 advantage with 5:20 left in the third quarter after a triple by Cholo Anunuevo only for the Tamaraws to go on a dry spell as Ateneo connected 13 unanswered points to close the period.

L-Jay Gonzales tied the game at 65 before Kouame converted two foul shots with 1:03 to go.

The Tamaraws failed to score on three straight possessions as Padrigao and Dave Ildefonso iced the game with four foul shots.

Torres scored 19 points while Gonzales and Patrick Sleat had 15 and 10 markers, respectively, for FEU, which slid to a 4-8 card that put it in a precarious position in the race for the remaining Final Four seats.