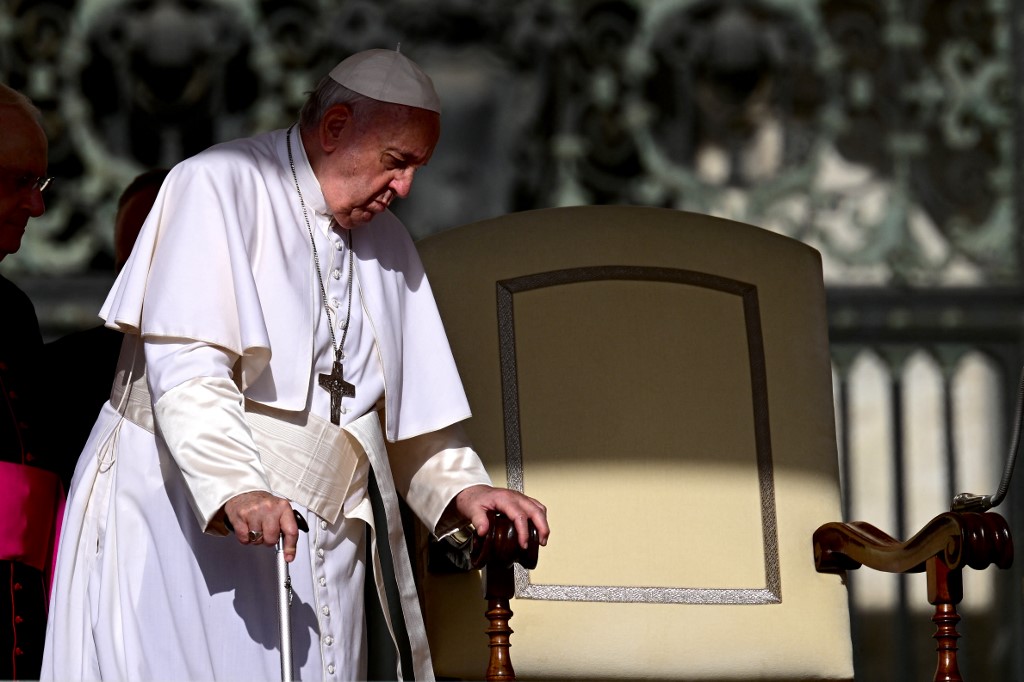 Pope Francis arrives to holds his weekly general audience at St. Peter’s square in the Vatican on 7 September 2022. The 85-year-old pontiff, who uses a wheelchair and has admitted he must slow down or consider retirement, will take part in an inter-religious summit in Kazakhstan’s capital city, Nur-Sultan, from 13 to 15 September. (Photo by VINCENZO PINTO / AFP)

Pope Francis heads to Kazakhstan next week, despite an injured knee, for a visit likely to be dominated by tensions in the Central Asian region following Russia’s invasion of Ukraine.

The 85-year-old pontiff, who uses a wheelchair and has admitted he must slow down or consider retirement, will take part in an inter-religious summit in the capital city, Nur-Sultan, from 13 to 15 September.

Some 100 delegations from 50 countries are expected to take part in the event in Kazakhstan, which is just south of Russia and gained independence with the 1991 collapse of the Soviet Union.

Authoritarian President Kassym-Jomart Tokayev, 69, is an ally of Russia, though there have been tensions between the two countries since Moscow launched the invasion of Ukraine in February.

Tokayev has refused to support the invasion and the presence of a large Russian community in the north of Kazakhstan has sparked fears of a revival of Russian imperial ambitions in the area.

Kazakhstan borders other former Soviet republics, as well as China and the Caspian Sea.

“Given the dramatic international situation, the visit brings hope for peace and reconciliation on a global scale,” the Archbishop of Nur-Sultan, Tomasz Peta, told Vatican News ahead of the trip.

There had been murmurs of a possible meeting in Kazakhstan between Francis and Russian Orthodox Patriarch Kirill, a close ally of President Vladimir Putin, as part of the pope’s diplomatic efforts to end the conflict.

While the pope has called for peace and denounced a “cruel and senseless war”, Kirill has defended Putin’s “military operation” and the fight against Russia’s “external and internal enemies”.

The chance for a possible meeting was lost last month, however, when the Russian church said Kirill would not be travelling to Kazakhstan.

Francis may find himself instead meeting Chinese President Xi Jinping, who will be in the country at the same time.

The Vatican is currently negotiating with China over the renewal of a historic provisional accord on the appointment of bishops in China.

China severed ties with the Holy See in 1951, forcing Catholics to choose between membership of the state-run Chinese Catholic Patriotic Association or underground churches loyal to the pope.

No meeting has been announced. Without diplomatic ties between the Vatican and China, any face to face between Francis and the president would be unofficial.

The pope, who suffers from knee pain that has forced him to cancel numerous events at the Vatican, is expected to land Tuesday early evening in Nur-Sultan, where he will go to the presidential palace and deliver a first speech to the authorities and the diplomatic corps.

On Wednesday, he will address the opening of the plenary session of the Leaders of World and Traditional Religions congress, before celebrating a mass in the afternoon and winding up his trip Thursday by meeting Catholic leaders.

Energy-rich Kazakhstan has 19 million inhabitants, 70-percent of whom are Sunni Muslims, while 26 percent are Christians — mainly Russian Orthodox. Less than one percent are Catholic.

Tokayev began a series of reforms after his election in 2019, but the country was rocked by protests over fuel prices earlier this year that left over 200 people dead and shattered its image of stability.

Adrien Fauve, researcher and director of the French Institute for Central Asian Studies, told AFP there were “very significant tensions” in the country, which was “witnessing a stage in the consolidation of the power of the current President Tokayev”.

Francis is the second pope to visit Kazakhstan after John Paul II’s trip in September 2001.