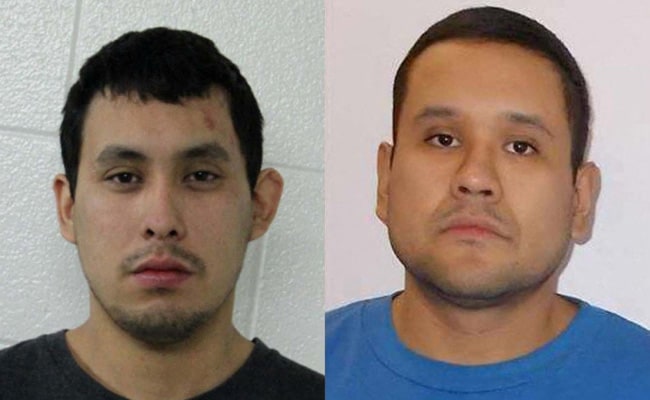 OTTAWA, Canada (AFP) — A stabbing spree in an indigenous community and a nearby town in Canada’s Saskatchewan province left at least 10 people dead and 15 wounded on Sunday, police said, as they launched a manhunt for two suspects in one of the nation’s deadliest incidents of mass violence.

She said at least 15 other people had been wounded and transported to hospitals.

“It is horrific what has occurred in our province today,” she said. “We are actively looking for the two suspects.”

The alleged attackers fled in a vehicle and have been identified as Myles and Damien Sanderson, aged 30 and 31 respectively, both with black hair and brown eyes.

The James Smith Cree Nation, with a population of 2,500, declared a local state of emergency, while many residents of Saskatchewan province were urged to shelter in place.

Blackmore said authorities believe “some of the victims were targeted by the suspects and others were attacked randomly.”

“To speak to a motive would be extremely difficult at this point in time,” she added. No information was released about the victims.

Television images showed a few rural homes in fields of tall grass and trees, cordoned off with police tape, while on social media locals shared images of the attacks’ aftermath, such as the broken door handle to a burgled home.

Weldon resident Diane Shier told local media her neighbor, a man who lived with his grandson, was killed in the attack.
“I am very upset because I lost a good neighbor,” she told the Canadian Press news agency.

A “dangerous person” alert had been issued in the morning in Saskatchewan, as police responded to multiple stabbings in multiple locations in the Indigenous community and Weldon.

Police received a call at 5:40 a.m. (11:40 GMT) about a stabbing at the James Smith Cree Nation, followed quickly by more calls reporting further stabbings, at a total of 13 separate locations, Blackmore said.

The callers identified the suspects, she said.

“Maximum” police resources were deployed for the search for the suspects, she said, but added that “their location and direction of travel is unknown.”

After reported sightings of the two men in Regina, the provincial capital that is more than 300 kilometers to the south, the alert and search expanded to include neighboring Manitoba and Alberta provinces — a vast region.