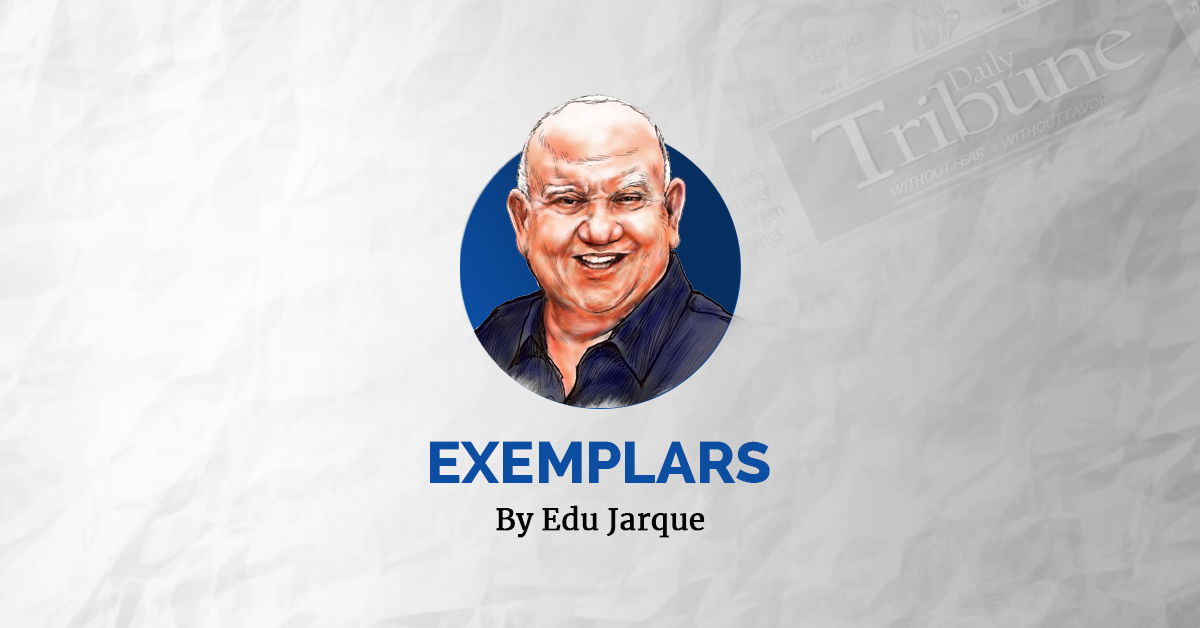 Antonio Abad Santos “Butch” Valdes, who I only met in college some over fifty years ago, became a friend for life. He was the inspired catalyst, the prime mover, who continuously and endlessly initiated activities — whether they be reserved lunches, at-home dinners, holy masses, or even trips to the clan properties in Iba in Zambales, Bagac in Bataan or Baguio City, all the way to observing religious traditions in Bacolor, Pampanga.

As years passed, I resided abroad for close to 25 years. Yet, we still kept in touch, though not as often as before. I would only get sparing glimpses of the kids every now and then, my images of them seemingly frozen in time.

It was a big, pleasant surprise when I dropped by the Heritage Park for the wake, when I saw these eight children — there goes the term again — who have bloomed into young ladies and gentlemen, and all delivered eulogies for their father.

Though they all had their tearjerker, nostalgic speeches, we only have space for one. Son Joaquin Pedro Valdes, actor, director and West End performer for various musicals, shared his very own reflections on what his dad meant to the world.

Here is his very own heart-rending speech:

My Dad was a paradox.

Interestingly, this was a word that, as a young boy, I distinctly remember him teaching me. A word he carefully defined to me.

“A seemingly absurd or self-contradictory statement or proposition that when investigated or explained may prove to be well founded or true.”

“A situation, a person, or thing that combines contradictory features or qualities.”

Papa was a paradox.

At home, particularly to me, he was a voice of correction, the belt of discipline and oftentimes indignation. He was a pillar of authority. He had a way with words that was effective, cutting and piercing. A dictator that set me against impossible standards of propriety and righteousness.

Butch was a paradox. Constantly reminding me to not be too “proud” or “mayabang.” Encouraging me to remain low-key.

To his La Salle friends, he was the center of attention, the life of the party. He was a prankster. A charmer. A ladies man. A performer, a sportsman and if you believe in legends, a legendary athlete of the year. A fiercely loyal friend. A brother. A constant. Someone to call when you are in trouble. Someone to talk to when you need counsel. Someone who is undoubtedly a hand to hold or a shoulder to cry on.

Sir Butch was a paradox. Outwardly wary and reluctant of my pursuit of the Arts, Music and Theatre.

To his students, the Larouche Youth, Save the Nation, Ang Ating Katipunan and the many other advocacies and organizations he founded, he was a Renaissance man. He was inspiration. He was passion.
He was enlightenment. He was both music and literature, squaring the circle, doubling the square and understanding the cube. He was Mendelssohn, Jonathan Swift, William Shakespeare, Mozart and Bach. He was Nicholas of Cusa, Leibniz, Franklin Delano Roosevelt, Keppler and Jose Rizal. He was science. He was art. He was Plato… urging all of us to break the chains and walk out of the cave.

Chairman Butch was a paradox. “Be careful,” he told me regularly. “Do not take risks.”

To the KDP, he was a leader. A patriot. The epitome of public servanthood. A volunteer. An activist. An idealist. Pragmatic yet hopeful. Cautious but fearless. A Prometheus bound and mocked, and ridiculed for standing by and fighting for Truth.

I was always envious of the country. How it seemed that my father loved the country more than he loved me. I’m an actor, I like attention.

Not many people can say their dad ran for senator and president. A paradoxical move, I myself never understood, considering he didn’t have the financial means and support needed to win elections of that scale. Illogical. Wild. Risky. Bold. Mad. It was only later that I came to realize that the goal was never to win in a broken system that he so loudly criticized. The goal was to stand on a soapbox and be heard. The goal was to rally the few who in body count maybe small, but in heart, and in will, and in love for country, can overcome and transform millions.

My relationship with Papa is a paradox. But much like Mozart’s “Ave Verum,” the resolve doesn’t come without passing through dissonance.

I admittedly resented how Papa seemed to never understand my chosen path and why I decided to move and stay in London. He was always and constantly urging me to come back home. “When you are done with your acting thing, come back home…” was a regular demand. It irked me, frustrated me, and angered me that it seemed he kept pulling my strings down and preventing me to fly.

I didn’t want to come home for Christmas. My wife Agee (who is the wiser and better half) encouraged me to come home to see the family after three years of being away, and especially after we lost Anton in 2021. Papa paid for our trip home in full. I arrived on Christmas Day and went straight to San Juan for a dinner that Papa had Pearlyn prepare. A feast like no other. It was the best meal of my life. A feast I didn’t deserve. I gave him a big hug and took my seat next to him as I usually do and suddenly all the reasons I was reluctant to come home were no more. While we weren’t physically complete around his proud lazy Susan, it felt like we were all together — Itos, Anton, Angela, Stella, Chin, Karissa and Kiana. It felt complete.

While Papa had lost a little bit of his usual heat and fire akin to his Professor Butch days, a new fire burned warm. A comforting fire. A healing fire. He was lively, funny, opinionated, and really satisfied. I saw a glimpse of the many paradoxes of Butch Valdes, complicated, contradictory, but all true.

A few days later, my Papa went home to the warm embrace of Lolo Charlie, Lola Aida and my brother Anton.

My story with my Papa Butch is a paradox. When I was five years old in nursery level in Xavier School we had a Father and Son Kite Flying Day. My Papa Butch, a successful, important and proud man had bought the Rolls Royce of kites. It was shaped like a butterfly/bird and it had two strings on either side of the wings and two handles. It was sure to put the other dads to shame, their kites had nothing on ours. While we were assembling the kite, one of the essential plastic tubes came off a wing and fell into the gutter. We couldn’t retrieve it. When it was time to go to the football field with the rest of the dads and sons, Papa frustratingly tried to make it work with just one string. The balance was off and it would never lift off the ground. Papa and I spent the whole day running around and trying to throw it hard into the air hoping it could catch wind. It never did. But he never stopped trying. He never gave up.

Papa was probably embarrassed and likely cracked a joke about how funny we looked to the other pairs. It didn’t matter to me at all. I was with my Papa. And that was all that mattered.

A couple of days after he passed, I found out that he had collected newspaper clippings and articles of my life and work in London and tasked Stella to carefully frame them so he could give it to me when I came home. He was so, so, so proud.

Papa, you were always so concerned about my distance. Constantly wanting me to take my seat around the Lazy Susan table. Constantly urging me to stay home.

But the paradox is that even if I live thousands of miles away, the truth is that I never left home, I never left you. I take all your paradoxes, your rage, your passion, your enlightenment, your genius, your heroism, your integrity, your unwavering defense of THE TRUTH with me WHEREVER I go. You never liked my tattoos- but each of my tattoos- the last line from Mozart’s Ave Verum and an image of Prometheus Bound are because I take you with me wherever I go. And while I don’t think I’ll ever come close to your deep and complex accomplishment, I won’t ever stop trying.

You were so many things to so many people, seemingly contradicting, seemingly illogical…but incontrovertibly TRUE.

Look up pa! Look at how high our Kite is flying now Papa!

Please give Anton that hug I never got to give him.