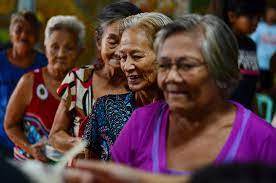 A bill seeking to increase the monthly social pension of indigent senior citizens is now a law, the Senate reported Tuesday.

The proposed measure lapsed into law on 30 July.

The measure also transfers the implementation, distribution, and management of the social pension for senior citizens from the Department of Social Welfare and Development to the National Commission of Senior Citizens within a period not exceeding three years.

It also stated that stipend should be given in cash via authorized channels and should be free of any charges.

Sen. Grace Poe, who is the principal author of the law, expressed her gratitude to her colleagues for their support of the measure.

“As principal author of the measure, I thank my colleagues for supporting this important and long-overdue legislation,” Poe said.

The lady senator also extended her gratitude to President Ferdinand Marcos Jr. for “recognizing and acting on the needs of our senior citizens.”

The Senate Bill 2506 or the Social Pension of Indigent Senior Citizens Bill was approved on third and final reading last 31 May and adopted by the House of Representatives the following day.